Both the text and the tune of our final hymn (#635, Hymnal 1982), Wer nur den lieben Gott, were written and composed by the same individual, Georg Neumark (1621-1681). Created during the period in Europe of The Thirty Years War, it comes from a time, not unlike our own, when social and economic upheavals had produced deplorable conditions in many places. Neumark was traveling from Magdeburg to Konigsberg to study at the university there in 1641 when he was attacked and robbed of nearly all his possessions except his prayerbook and a small amount of money sewn into his clothing.  He spent much of the next two years looking unsuccessfully for employment until he found a position as a tutor in Kiel where he was eventually able to save enough money to attend university. He studied in Konigsberg for 5 years before once again losing all that he had in a fire.  It was just after finding work as a tutor in Kiel that he composed this hymn. Neumark later wrote, “This good fortune, which came so suddenly and, as it were, from heaven, so rejoiced my heart that I wrote my hymn, Wer nur den lieben Gott, to the glory of my God on that first day.” He gave this hymn a special subtitle reading, “a hymn of consolation, that God will preserve his own in his own time; after the saying, ‘Cast thy burden upon the Lord and he shall sustain thee.’ Psalm 55:24” In spite of a life filled with many tragedies, Neumark went on to write many more hymns expressing his absolute trust in God.

Wer nur den lieben Gott became especially popular through the Baroque era, and J. S. Bach (1685-1750) included it in no fewer than eight cantatas and also wrote several chorale preludes based on it. Catherine Winkworth (1827-1878) published an initial English translation of the hymn in her Lyra Germanica in 1855.  This first attempt, however, was in a different meter than the original and was, thus, unsingable with Neumark’s melody.  She later radically revised her work in a new translation and published it a second time in The Chorale Book for England (1863) where it was reunited with Neumark’s original tune. This version has had extensive use, especially in American Lutheranism, from the last quarter of the 19th century. The Hymnal 1982 employs, slightly revised, the first and last stanzas of the original, seven-stanza hymn.

The chorale prelude played today as our opening voluntary is the work of Anton Wilhelm Leupold (1868-1940). A native of Austria, Leupold became the organist of St. Peter’s Church, Berlin in 1899, a position he would hold for the next forty years.  Although he composed many types of church music, the bulk of his works were in the genre of the chorale prelude, of which he left some 200 examples. 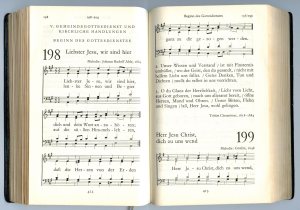 Today’s opening voluntary is a chorale prelude on the hymn tune, Liebster Jesu, sung today as our offertory hymn, “Blessed Jesus, at thy word” (#440, Hymnal 1982). The original version of the tune was a composition of Johann Rudolph Ahle (1625-1673) and first appeared in 1664 paired with the text of an advent hymn.  Ahle was born in Mülhausen, Thuringia and studied theology at the University of Erfurt from 1645-1649.  He became the cantor of The Church of St. Andrew in Erfurt in 1646 and was later appointed organist of the Church of St. Blasius in Mülhausen in 1654.  Ahle’s  original tune, a somewhat florid and soloistic work, was later altered to a form more appropriate for congregational singing and was paired with the present text of Tobias Clausnitzer (1619-1684), Liebster Jesu, wir sind hier. It was republished in that revised form in 1687 with Clausnitzer’s previously-published text of 1663.  It entered into English hymnody in the 19th century through the translations of Catherine Winkworth (1827-1878) and was first published in her work, Lyra Germanica of 1861. It was later included in The Chorale Book for England in 1863 along with its associated melody.

Clausnitzer’s German text was originally subtitled “before the sermon” and contains references to and quotes from other portions of the liturgy.  The Sursum Corda is eluded to in the first stanza, “dass die Herzen von der Erden/ Ganz zu dir gezogen werden,” freely translated into English as “that our hearts from the earth are wholly drawn to thee.” This is lost, however, in the poetical translation of Winkworth that we use today.  There is a more direct quote in stanza three, “Light of Light, from God proceeding” from the Nicene Creed.  The text and tune were later parodied by baroque period composer, Benjamin Schmolk (1672-1737), who retained only the first line of Clausnitzer’s hymn, and created the rest of a new text on a baptismal theme.  One stanza of this later work appeared in The Hymnal of 1940, but it was not retained in our present Hymnal 1982.

In the baroque period, composers, particularly in the Germanic Lutheran countries, began to set chorale melodies for the organ.  The original purpose of these “chorale preludes,” as they are known, is not absolutely clear.  Some of them may have been used as introductions to congregational singing, while others were more likely to have been intended to function as free-standing compositions.  Musicologists today describe at least eight different types of treatment of the chorale in these works.  Today’s version of Liebster Jesu by J. S. Bach (1685-1750) is of the “ornamented cantus firmus” type in which the chorale melody (cantus firmus), usually (and in this setting) in the top voice, is presented in a highly ornamented  form supported by a relatively simpler harmonic accompaniment.

Today’s opening voluntary is a composition by French Romantic organist, Henri F. Deshayes.  Deshayes was born in Rouen France in 1838 where he took his musical training.  He was subsequently organist to the Spanish Place Chapel in London for five years before settling in Paris where he became the organist for L’ Eligse Reformée de l’Anonciation in the village of Passy on the outskirts of Paris.  In addition to playing and publishing numerous works for the organ, Deshayes worked as a schoolteacher in the village of Passy.  As was also the case for many of his contemporaries, Deshayes works fell victim to a changing aesthetic and fell out of popularity for many years.  These compositions, however, are undergoing a revival of interest, and it is hoped that their music will continue to be heard with increasing frequency.

The publisher of the particular U. S. Edition of Deshayes’ Andante Religioso played today (a vintage score from 1889) was also a musical figure of some note and a prominent organist in his own right.  Everett E. Truette was born 14 March 1861 in Rockville, ME and died December 16, 1933 in Boston, MA.  Truette was a pupil of famous French Organist, Alexandre Guillmant (1837-1911) and noted English Organist, W. T. Best (1826-1897). He  himself served as organist of the Eliot Church in Newton, MA.  Probable due to his association with Guillmant, Truette had a particular interest in the music of European continental organists, and he published for several years a journal, The Organ, which included many short works by European composers. In keeping with the contemporary revival of interest in works of this period, the journal was republished again under single cover in 1995. Truette’s editions of continental organists’ music (including today’s work by Deshayes) were also published by Arthur P. Schmidt (1846-1921), a German immigrant, who opened a music shop and publishing house in Boston in 1876, soon after his arrival from Germany. Although in business for only 13 years, he was a notable supporter of the works of many American composers, especially those of New England including John Knowles Paine (1839-1906) and George Whitefield Chadwick (1854-1931).  Among many other achievements, Schmidt was the first American publisher to publish an American Symphony, Chadwick’s Symphony #2, in 1888.

Today’s opening voluntary presents three variations on the famous hymn/national song tune, AMERICA. This tune occurs  several times in The Hymnal, 1982, but most appropriately, for this Independence Day holiday, as #717, “My country, ‘tis of thee.” Although this famous song is the official national anthem of the United Kingdom and is well-known as a hymn/national song in several countries, it is surprising to note that its composer is unknown.  Historically, musicologists believe that it may have begun as a Jacobite song originating in the 1680s, but its first publication was in 1744 in London in a collection titled, Harmonia Anglicana. It became popularized in London in theater performances in 1745 in a version by Thomas Arne at the height of the second Jacobite rebellion, when it served to focus the loyalty of the British majority behind King George II. It was, at this time, paired with its most-known text, “God save the King!”

The text of #717, “My country, ‘tis of thee,” was written by Baptist minister, Francis Smith, during his first year of study at Andover Theological Seminary. Famous hymn-writer, Lowell Mason, had received a number of German chorale books in gift but was unable to translate them and sought the help of Smith.  Apparently, Smith was particularly attracted to a German patriotic text, “Gott segne Sachsenland” (God bless Saxony). According to Smith’s own testimony, “I instantly felt the impulse to write a patriotic hymn of my own, adapted to the tune…I wrote at once, probably within half an hour, the hymn ‘America’ as it is now known.” The hymn was first performed on July 4, 1831 at an Independence Day celebration by the Boston Sabbath School Union.  Lowell Mason then published it in Choir, or Union Collection of Church Music in Boston the following year. It first appeared in an Episcopal hymnal in a single stanza version in the Hymnal of 1892.

The composer of today’s musical setting is Anthony Vito Giamanco, born 22 September 1958 in Detroit, Michigan. Giamanco studied music at Eastern Michigan University in Ypsilanti, Michigan. He has been organist of the Presbyterian Church of Taylor, MI, Shalom Lutheran in Pinckney, MI and presently is the organist for St. Mary’s Catholic Parish, also in Pinckney.  This piece in three sections begins with a quiet, lyrical version in which the melody alternates between manuals to a chromatic accompaniment of moving chords.  The second, somewhat whimsical movement, presents the melody in running 16th note passages, evoking the style of 18th century music for fife and drum.  The third and final setting presents the first three lines in a series of modulating and gradually crescendoing variations followed by the final line in a forte, declamatory coda.