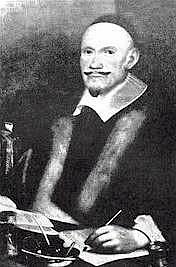 Today’s opening and closing voluntaries are both based on the tune for the hymn, “Jesus, all my gladness” (Jesu meine freude) sung as our final hymn today (The Hymnal, 1982 #701).  The text and tune appeared together from the first in Johan Crüger’s Praxis Pietatis Melica, published in Berlin in 1653.  The tune is Crüger’s own and was paired with the text written by  his personal friend, Johann Franck.  This text, in German original, was six stanzas long and apparently modeled on a love song, popular at the time, by the title “Flora, meine freude,” which appeared more than 10 years earlier in 1641. Franck was born in Guben, Brandenburg in the year 1618.  His father, of the same name, died when he was only 2 years of age, and he was adopted by his uncle, who was the town judge.  In 1638, he became a student of the law at the University of Königsberg, the only German university that was left undisturbed by the 30 years’ war. He returned home only 2 years later at the request of his mother in Guben who wished him near her during the turmoils of war during which Guben was occupied by both Swedish and Saxon troops.  He began his practice of law in 1645 and was successively burgess and councillor, burgomaster and, finally, deputy from Guben to the diet of Lower Lusatia.  Although he published a number of secular poems, he also wrote some 110 hymns, most of whom were published by his friends, who included Johann Crüger, publisher of  his Jesu meine Freude.

Johann Crüger was born in 1598 at Gross-Bresse, Brandenburg, not far from the town of Guben where his friend Franck was born and lived. After his schooling, he settled in Berlin where, except for a short stay in 1620 at the University of Wittenberg, he remained for the rest of his life.  In 1622 he was appointed cantor of St. Nicholas’ Church in Berlin. Crüger was considered one of the best musicians of his day and composed a number of hymn tunes, although he himself is not known to have written any hymn texts.  Of his many tunes, about 20 remain in common use today, perhaps the most famous of which is that for the hymn, Nun danket alle Gott, usually known in English translation as “Now thank we all our God” (#396, The Hymnal 1982).

Crüger’s tune for Jesu meine Freude was a particular favorite of J. S. Bach (1685-1750) who used it in 4 cantatas, a 5-part motet and as the basis for several organ works.  The version played today as our closing voluntary is from his Orgebüchlein, a collection of some 46 pieces on chorale tunes arranged for the liturgical year.  Most of them were composed during the years 1708-1717 when he was organist of the ducal court in Weimar.  Our opening voluntary today is a chorale prelude on this same tune by Bach’s contemporary, Johann Gottfried Walther (1685-1748)

By long custom, the organ plays a decreasing role in the successive pre-Easter liturgies of Holy Week until the Solemn Liturgy of Good Friday when the organ falls silent before the mystery of the Crucifixion. After this, it will not be heard again until the announcement of the Resurrection in the celebration of the Solemn Mass at the Great Vigil of Easter.   Although today’s liturgy begins in a celebratory manner with the processional re-enactment of the triumphal entry of Jesus into Jerusalem acclaimed by the masses as the Davidic Messiah, the mood of elation quickly sours,  as the story falls precipitously into the recitation of the Markan passion narrative.  In keeping with the increasing solemnity of today’s observance, the incidental organ music today is limited to just two settings of the classic passion hymn, “O Sacred Head” (#168, The Hymnal 1982) traditionally sung to the tune, Herzlich tut mich verlangen, by Hans Leo Hassler (1564-1612).  The text of the hymn we sing today derives originally from a stanza of a long passion poem in Latin that begins with the words “Salve caput crucentatum,” While traditionally attributed to Bernard of Clairvaux, (1091-1153), more recent scholarship has  identified it as work of mediaeval poet, Arnulf of Louvain (d. 1250) a Cistercian and Abbot of Villers in Brabant.

Hail, head covered in blood,
all crowned with thorns,
battered, wounded,
beaten in this way with a reed,
with your face smeared with spit.

The setting heard at the communion was composed by North German organist, Dietrich Buxtehude (c. 1637-1707).  As is characteristic of many of his chorale preludes, the melody, or cantus firmus, appears in the highest voice in a highly ornamented form.  It is accompanied in the manual and pedal in three further parts in a counterpoint and musical imitation.  The second version heard today is a more straightforward composition by Johann Gottfried Walther (1684-1748) in which the melody is accompanied by slow descending triplet (three-note) figures that form, somewhat counterintuitively, a plaintive, limpingly dance-like and ironic background to the chorale melody. This version will be used to introduce the congregational singing of today’s final hymn. Our liturgy today closes with a period of silent contemplation instead of the usual voluntary.